It is one of the astonishing facts of the extreme fringes of the Confederate heritage movement that a group of people who claim that they want to bring people the true history display so little understanding of it … in fact, some of them are so busy writing that it leaves them very little time to read the very material they promote … or so it would seem.  Nowhere has this been more apparent recently that in the confusion I’ve seen over the use of enslaved laborers to build the United States Capitol.  Apparently this is now understood in some corners as evidence that the Lincoln administration used slaves to build the Capitol (because, after all, Washington DC is also in “the North”).

Sometimes ignorance can be so astonishing that it is breath-taking (although an interruption in the supply of oxygen to the brain might explain these bizarre claims).

The United States Capitol was designed in accordance with the flawed architectural designs of one Dr. William Thornton (a slaveholder, by the way) in the 1790s.  Enslaved laborers did in fact construct much of the inaugural building, including John Hemings, one of Thomas Jefferson’s slaves (you may have heard of another Hemings at Monticello, but I digress).  At that time, slavery was legal in the District of Columbia as well as in the bordering states of Virginia and Maryland: President Washington had chosen the site after his secretary of state, Thomas Jefferson, and Congressman James Madison had secured the relocation of the capital southward (note that all three men were slaveholders).  For those wanting a more detailed report on the use of enslaved labor at this time, I direct you here.

Over time, the Capitol building underwent several other changes.  We’ve not seen nearly as much research on the role of enslaved labor in those changes.  Slavery remained a significant part of life in DC, so much so that the Compromise of 1850 continued to protect slavery in the district while ending the slave trade there (a slave auction stage was located within sight of the Capitol).

In the 1850s, work commenced on a new dome for the Capitol as part of a larger program of expansion (Thornton’s design had already been significantly revised by Benjamin Latrobe and Charles Bulfinch).  Secretary of War Jefferson Davis played a major role in the design of the Stature of Freedom that adorns the top of the dome: he asked for changes so that it didn’t look as if it was advocating freedom for slaves.  Davis, of course, was also a slaveholder and later president of the Confederacy.  His chief engineer?  Montgomery Meigs, who much later was put in charge of relandscaping the grounds around Arlington House (he would eventually be replaced for a short time by William B. Franklin).

Work continued on the Capitol during the Civil War, but the recognition of the use of slave labor involves the building of the original Capitol.  Moreover, in 1862 Congress, with Lincoln’s enthusiastic support, abolished slavery in the District of Columbia, something Lincoln had first sought during his single term in Congress.  Thus slave labor was not available after that time because the slaves in DC had been freed; Maryland followed suit and ended slavery in 1864 (my Confederate heritage fanatics have never alerted me to any efforts by the Confederate Congress to free Confederate slaves, and I don’t believe that’s how freedom came to southern slaves). 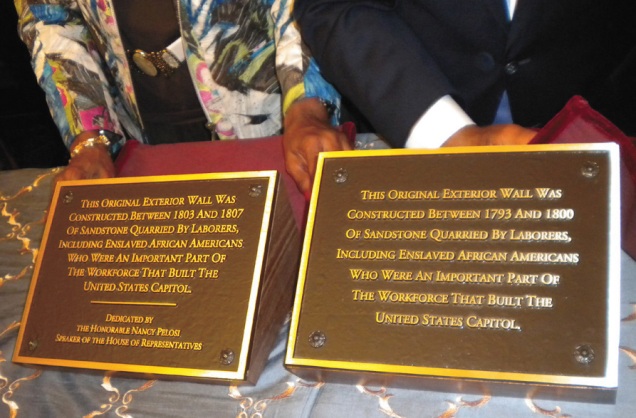 Congress recently recognized the use of enslaved labor in building the Capitol, and has placed two plaques to mark the occasion.  Note the dates cited on the plaques … Lincoln was born after this work was completed, making it hard for him to approve this.

Other people have gotten their history confused on this as well.  No matter.  But at least it will be interesting if some people will simply admit their confusion and acknowledge their error (and no, I’m not going to link to their foolishness … they monitor the blog anyway).

Here’s a nice short visual history of these developments down to the present.  And here’s a C-SPAN episode on testimony before a Congressional committee.