Last Friday and Saturday I was fortunate enough to be part of a public program offered by the Huntington Library entitled “Civil War Lives.”  Assembled was a rather impressive assortment of scholars: Gary Gallagher and Joan Waugh had organized a conference that included James McPherson, David Blight, Ron White, Steve Cushman, Alice Fahs, Caroline Janney, David Carwardine, and Brenda Stevenson.  It was very nice to be included with such a stellar cast.  I got to meet people whose work I admire, although sometimes the conversations were far too short; I did discover that Carrie Janney was a fellow Wahoo, separated by some two decades, who maintained a serious interest in Cavalier football (she would have done better to have followed the fortunes of her current institution last Saturday).  It was also interesting to hear colleagues reflect on the changes brought about and the challenges presented by the internet, which seems to me to be part of two larger discussions of how historians (should) conduct their research and how they (should) communicate with a broader public (one of my colleagues takes a dim view of my blogging, for example, although I never discovered why).  As for bloggers, there was Keith Harris of Cosmic America, and I note that he has yet to share his impressions; I was asked by my skeptical colleague whether I planned to blog about the conference while at the conference, but I think that in this case it’s best to participate, then observe and reflect.  It was a great deal of fun to catch up with David Blight (our adviser Dick Sewell will be pleased to know that his students were the last speakers each day) and talk shop with several people, including Gary and Joan, who I want to thank for inviting me to the conference.

I’ll offer some comments on what I heard during the presentations and outside the presentations, because, as you might imagine, several discussions covered areas of concern that I found of interest (and it’s the topics, not identifying the people who voiced them, that seem to me worth sharing, so that’s how I’ll treat what I think appropriate to discuss). 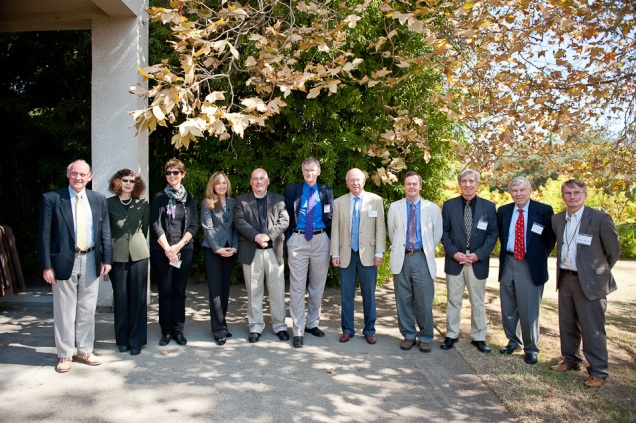 From left to right: Richard Carwardine, Joan Waugh, Alice Fahs, Caroline Janney, some guy I call me, David Blight, Ron White, Steve Cushman, Gary Gallagher, James McPherson, and Steve Hindle of the Huntington, our host, who did a magnificent job.

7 thoughts on “Echoes from the Huntington”