Many of you have heard about H. K. Edgerton, an African American heritage activist.  Some people celebrate him, some people ridicule him, some people attack him.  Frankly, I don’t care.  What Mr. Edgerton believes and what he wants to do is up to him, and, no, I have no problem with his charging fees to appear at various functions.  If someone’s willing to pay, that’s their business, and I’m sure they get what they pay for.

But there is something about Mr. Edgerton that causes me to scratch my head.  It’s this … 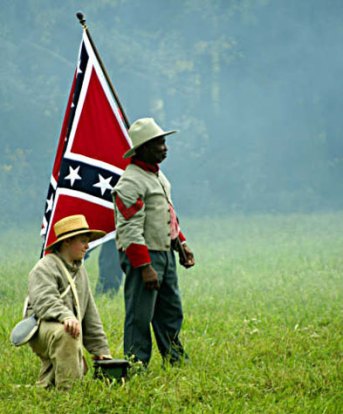 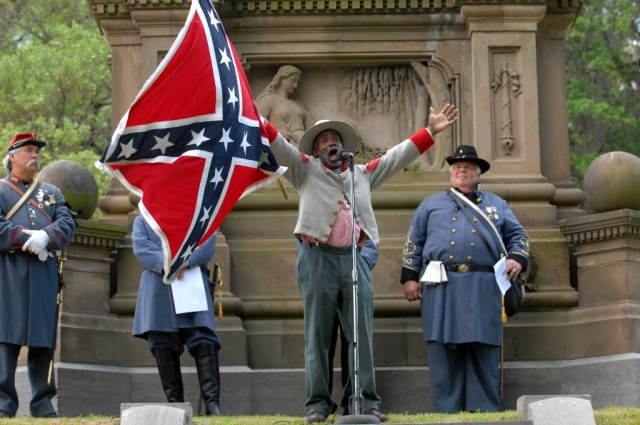 I’m unaware of any African Americans who actually served in the Confederate army as sergeants in the artillery.  Yes, I have heard one Confederate heritage enthusiast claim that there was an entire regiment of black Confederate cooks, but this is a little different.

Has anyone come across evidence of African Americans in Confederate military service with the rank of sergeant in the artillery?

Of course, one could point out that this is not the only uniform Mr. Edgerton uses, and they would be right.  Indeed, in the other images I’ve seen, I haven’t seen him give himself rank. Have you?

Moreover, one could argue that this is a case where Mr. Edgerton is in fact portraying a black slave (perhaps an officer’s servant) who appropriated the shell jacket in the aftermath of a battle in which its original wearer sacrificed all for the cause.  But I haven’t seen that case made.

Even Dixie Outfitters features Mr. Edgerton in his sergeant’s artillery shell jacket.  It also draws upon that image for a rather confused t-shirt image:

Here we have a black Confederate artillery non-commissioned officer marching as an infantryman.  Whatever.

So, what are we to make of this?

I confess I do not know.  But I know it could be worse.  Take this image of Mr. Edgerton … note any other non-standard issue items of apparel?

I thought you could.