That’s right … Pat Hines, southern nationalist, advocates the murder of schoolchildren if the United States does not leave the South to itself.

He did so on Connie Chastain’s “Backsass!”  Ms. Chastain and another poster were mourning the horror of the Beslan massacre some eight years ago, and they expressed concern that the same sort of horrible slaughter might happen in the United States.

Then Pat Hines piped up: 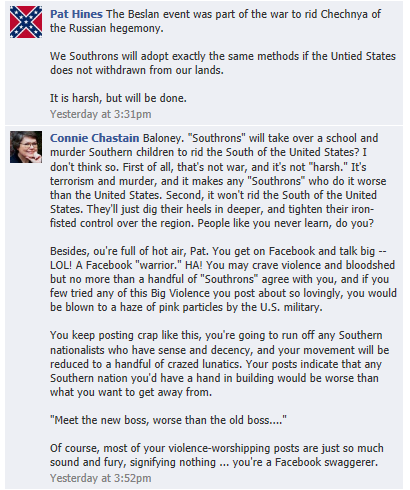 Let’s give credit where credit is due here.  Chastain not only distances herself from Hines, but she expresses her incredulity that Hines actually means what he says. Hines has no problem confirming that he means what he says:

Folks, it’s time that these sorts of threats of violence are stopped.  Report the group and Hines to Facebook.

Is this what southern nationalism is all about?  I doubt it, but let’s see what folks who like Hines do when they discover this.  That’s right, League of the South … I’m looking at you boys right now.

For those of you who can’t get enough …