What did the experience f battle look like during the American Civil War? This is something most of us are interested in comprehending. One often hears of this or that portrayal of Civil War combat as “realistic,” although I don’t know how anyone really knows what constitutes “realistic” except in their imagination.

We all know that the first images of battle circulated after a clash surveyed the aftermath of combat. Usually these photographs examined battlefields in the East, but Corinth offers an exception, as these two images demonstrate:

The second photograph of Confederate dead offers a vivid reminder of the carnage of battle … but not the experience itself.

Engravers soon sought to fill that gap.as we see here: 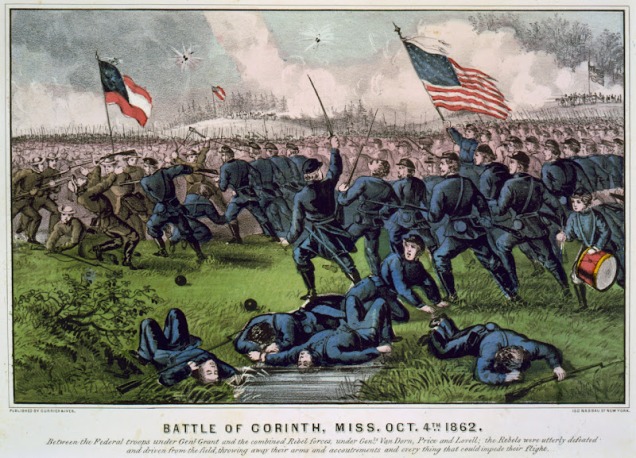 The Currier and Ives prints immediately cleaned up the battlefield a bit, but they were still somewhat crude. Nevertheless, they were the best one could do on short notice.

I am always of two minds about these images. Everyone is dressed so well in regulation garb in most of these images; the dead fall ever so neatly; generals are always prominently displayed. And yet publisher after publisher uses these images for book jackets (although Timothy Smith’s recent study of the battle features the color Currier and Ives print).

Painters took their turn as well:

I particularly like the Confederate standing with his arms folded as the Yankees pour forth. The painting celebrates the 5th Minnesota.

Note how the images of combat moved quickly to idealize the experience for the consumption of those at home. One wonders what veterans made of some of these images.

6 thoughts on “The Changing Face of Battle: Corinth”