You wish. Some do.

END_OF_DOCUMENT_TOKEN_TO_BE_REPLACED

On May 21, 1981, the New York Islanders repeated as Stanley Cup champions when they defeated the Minnesota North Stars, 5-1. 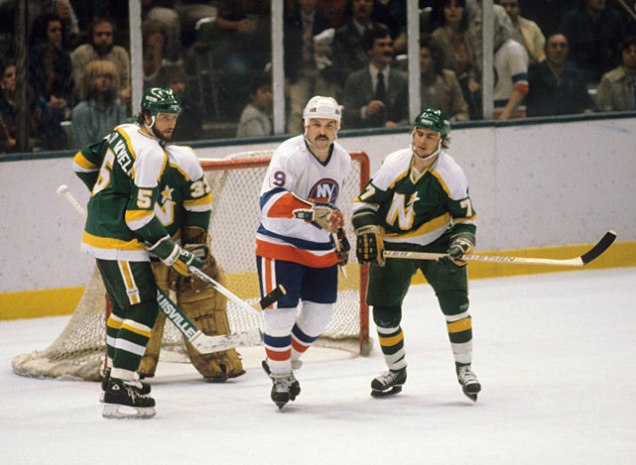 There’s no neat highlights package available. For the full game, here you go:

I have two favorite moments from that finals series. The second occurs at 50:00 on the game tape: Bryan Trottier’s assist meant that he recorded a point (a goal or an assist) in each game of that year’s playoffs, part of a 27-game postseason point streak over three years that remains an NHL record.

The first moment happened in Game One. In the first period, with the Islanders up 1-0, New York forward Bob Bourne received a five minute major, meaning that Minnesota could score as many times as it wanted to within that five minutes without terminating the power play. Instead, Trottier scored one goal and set up another shorthanded tally.  3-0, Islanders, at the end of one period en route to a 6-3 victory.

Give the North Stars credit. They were the only team to beat the Islanders in the Stanley Cup finals between 1981 and 1983. Unfortunately for them, they did this only one time, and it takes four wins to claim the Cup.

Butch Goring won the Conn Smythe as the playoff MVP. I would have awarded it to Mike Bossy, Bryan Trottier, or the man whose contributions to the four Cups seems to me to be underappreciated: Denis Potvin. Simply put, Potvin was an offensive powerhouse who sacrificed some of that individual glory for team success, and yet during his playoff he was deadly on the Islanders power play. Nothing against Goring, but sometimes the Conn Smythe tends to concentrate on play in the finals alone.

That said, Goring had one heck of a helmet:

It was a playoff year where the Islanders dealt with ghosts of upsets past, sweeping the Toronto Maple Leafs in the opening round, dropping two games to the upstart Edmonton Oilers, and then sweeping the dreaded rival New York Rangers before taking Minnesota in five games.

By the end of the final contest, Denis Potvin’s leg had given way, and Trottier was skating with a separated shoulder. However, it seems they were able to carry the Stanley Cup around the ice:

Someone couldn’t spell “Islanders,” by the way:

They say that the hardest thing is not winning a championship, but repeating as champion. The Islanders seemed equal to that challenge more often than not in the early 1980s.