James Longstreet’s performance at Gettysburg remains a rich source of controversy. Was his wise advice shunned by a headstrong superior? Did he nurse his resentments that he did not get his way into giving less than his best or in mindlessly following orders to the letter in an act of petulant stubbornness? Did he direct one of the war’s more powerful attacks on July 2 or did he fail to do what was needed to secure success on July 3?

One might divide Longstreet’s performance at Gettysburg into four periods: his disagreements with Lee prior to setting forth on the flank march; his performance during that march and the ensuing attack; his renewed willingness to bicker with Lee on the morning of July 3; and his management of that afternoon’s assault. Much of what is said about Longstreet depends on what else one things about what could have happened. For example, if one thinks that it was a dumb idea to attack Cemetery Ridge on July 3, one is less likely to be critical of Longstreet’s performance (after all, wasn’t failure inevitable anyway?),while if one thinks that the assault was bungled to the point that it deprived Lee of a chance to prevail, one is more likely to point a critical finger at Longstreet for not exercising adequate supervision. One wonders whether there is another way to approach this issue … or are we doomed to rehash the same old arguments time and time again? 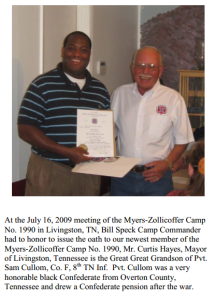 Someone called my attention to a recent thread on civilwartalk.com about Mayor Curtis Hayes of Livingston, Tennessee, accepting his membership in the Sons of Confederate Veterans. Mayor Hayes is an African American. The story is old news from 2009.

The ensuing thread of comments follows a predictable pattern. Research reveals that the ancestor in question (one Sam Cullom) was a recipient of a Tennessee pension for African Americans, not a veteran’s pension, and that there is no record of his service as a Confederate soldier. Others argue that to highlight the ancestor’s actual status is to quibble with the fact that the ancestor “served,” regardless of the capacity in which he served.

In short, some folks want to reclassify those who “served” as “soldiers” regardless of the historical reality that the people in question simply were not soldiers, imposing their present needs and desire on the past … and historical accuracy be damned. I can’t wait to hear some of them whine “political correctness” when they argue that the same practices are being embraced by people with whom they disagree.

And, of course, at times the conversation goes in other directions (just as it sometimes goes in the comments section here).

Anyway, as I’ve learned that CivilWarTalk (like Yahoo’s civilwarhistory2) sometimes links to blog entries here in order to foster conversation over there, I thought I’d return the favor.

News comes today that Ethan Rafuse,who with Mark Grimsley blogs at Civil Warriors, has decided to step away from blogging. You can read his farewell post here. Fortunately for me, I still get to work on various projects with Ethan, who’s left a significant mark on Civil War military history … and you can see us back-to-back on C-SPAN 3 this coming Sunday morning.

This will amuse some and frustrate others.

Support recycling … even if it litters the intellectual environment.

You tell me what you make of the generalship of Dan Sickles on July 2, 1863 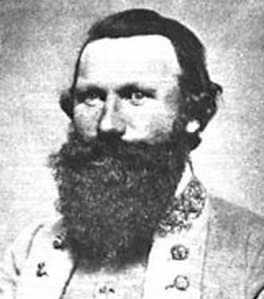 When it comes to Confederate defeat at Gettysburg, lots of people point lots of fingers (it is rumored that Jubal Early also pointed toes). If so-and-so had done his job, so the reasoning goes, the Confederacy would have won.

Take the case of Jeb Stuart. We all know the story of Stuart taking a ride around the Army of the Potomac based on a broad reading of his orders … and how he found it so difficult to get back to Lee, leaving his chief blind in enemy territory. Yet Lee learned soon enough about the Army of the Potomac crossing its river namesake, and one can argue that it was simply Lee’s overconfidence in his foe’s propensity to stumble that led him to believe otherwise. Besides, Lee’s use of the cavalry left under his supervision shows that it was not the absence of the horsemen but of a single horseman–Stuart–that was important. Still, I’m not sure all that much changes through June 29.

A better case can be made that Stuart’s absence proved most trying to Lee on June 30 and July 1, when it was left to infantry to find out who was at Gettysburg. Had Stuart’s horsemen screened the Confederate advance, as Allen Guelzo suggests, the initial engagement, if any, would have unfolded differently (although my guess is that light contact would have led Meade to think more about Pipe Creek and less about going into Pennsylvania). The clash around Gettysburg would have unfolded differently if indeed it happened at all.

Stuart would have been of some use had he arrived early on July 2, whether it would have been scouting the Union left or (in a more daring use) threatening the Baltimore Pike. By the time he came, however, it’s not clear what Lee could have done with him … and I don’t think he was used well at all on July 3.

Counterfactuals abound, of course, but perhaps they are not quite as drastic as one may surmise. My own thinking suggests that if Stuart was around on June 30 or July 1, we have an engagement at Gettysburg, but not the full-blown battle that followed.

Surely some of you have your own opinions.

In some corners there continues to be a debate over how to assess the influence of slavery upon white southerners. There are people who cite the percentage of slaveholders among all white southerners; those who argue that we should look instead to slaveholding families (only one person may own a house, but the entire family benefits from it, and many in the house hope to own houses of their own in the future). In either case, one sees that the lower South (also known as the Deep South) was far more invested in slavery (and slaves formed a higher percentage of their entire population) than the upper South.

Not all slaveholders supported secession, of course, although in many cases they explained their opposition to secession in terms of their concern about what a possible war might do to slavery. That’s a sign that concerns about slavery were critical in southern politics while reminding us that the relation between slavery and secession might be a little more complex than some would like to believe. We also know that the political leadership of the South was far more invested in slavery than the public at large, although that should come as no surprise. What might be interesting to explore is how many voters (adult white makes) were slaveholders (this recognizes that children and most women were not slaveholders, period). In short, what was the impact of slavery at the ballot box? To what extent were the politics of the South the politics of slavery, as several historians have suggested? After all, both Whigs and Democrats campaigned on the grounds that their party would do a better job of protecting slavery than their opponents. What motivated voters to vote as they did? What role did slavery play in their allegiances? What percentage of voters were slaveholders?

Of course, these questions offer at best a point of departure. One could ask many more. For example, someone might not own a single slave, yet their economic activity or political prospects may have been closely aligned with the fortunes of the peculiar institution. Moreover, how many white southern voters opposed slavery and hoped for its eradication? How many would meet the criteria used to define an abolitionist? Precious few, I’d wager. But it would be interesting to learn more about how many southern voters were vested in slavery as management and how views on slavery, secession,and union were recast (if at all) by the onset of war.

At least the second one is funny.

Note: I’ve had two white southerners complain that folks like Cushman and Chastain don’t represent them. No one said they did. But C and C are white southerners (again, there are those who think there’s something in the water in Florida, and that it might affect other people as well).  I understand why sensible people might want to distance themselves from C and C.

It seems to me that those white southerners who claim that these folks don’t speak for them might make it clear to those folks directly.  It’s just as easy to comment on their websites as it is to comment on this blog. Just a thought.

As we approach the 150th anniversary of the reason there are ghost tours and souvenir/t-shirt shops at Gettysburg, Pennsylvania, many people will rehash the performance of several key Civil War generals there. We might as well join in the fun. First up … George Gordon Meade, who assumed command of the Army of the Potomac days before the battle itself.

Meade’s performance at Gettysburg had come under scrutiny recently. Allen Guelzo’s new book has some harsh things to say about the general, although the criticisms are familiar to students of the battle. My own take is that scholars rarely take into account the pressures of command and how only a few truly great commanders dealt with those pressures. People like Grant and Lee were great in part because they were so rare: it’s so much easier to sit back in the quiet of one’s own study or look out over a nicely manicured field and say what someone should have done (I see the same characteristics in sports fans, who seem better able to give advice on what players should do the farther away they sit from the field of play). Yet one can go too much in the other direction. After the battle Meade was irritated by suggestions that he had contemplated retreating from Gettysburg several times during July 2: I would think it perfectly understandable that he did so, in part because Lee’s failure to renew offensive operations for much of the day gave Meade a lot of time to think. I also think Meade’s reoccupation with his right and his neglect of his left contributed to how that day’s events unfolded, although no one should read that as an effort to get Daniel Sickles off the hook.

I’m less harsh on Meade’s failure to pursue. I don’t think a counterattack on July 3 would have been a good idea. I do think he could have been more aggressive in seeking ways to obstruct Lee’s withdrawal to Williamsport. Once the Confederates had taken up position at Williamsport, I believe that Meade was right not to attack, because I think he would have been defeated … but he might have contemplated ways to pin Lee in place while looking for an opening to cross the Potomac and cut off his retreat into Virginia (after all, if Lee could cross the river, so could Meade). But I admit there’s hindsight and perhaps wishful thinking there.

What do you make of Meade at Gettysburg?