At least the second one is funny.

Note: I’ve had two white southerners complain that folks like Cushman and Chastain don’t represent them. No one said they did. But C and C are white southerners (again, there are those who think there’s something in the water in Florida, and that it might affect other people as well).  I understand why sensible people might want to distance themselves from C and C.

It seems to me that those white southerners who claim that these folks don’t speak for them might make it clear to those folks directly.  It’s just as easy to comment on their websites as it is to comment on this blog. Just a thought. 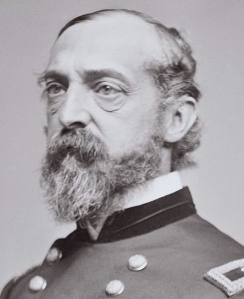 As we approach the 150th anniversary of the reason there are ghost tours and souvenir/t-shirt shops at Gettysburg, Pennsylvania, many people will rehash the performance of several key Civil War generals there. We might as well join in the fun. First up … George Gordon Meade, who assumed command of the Army of the Potomac days before the battle itself.

Meade’s performance at Gettysburg had come under scrutiny recently. Allen Guelzo’s new book has some harsh things to say about the general, although the criticisms are familiar to students of the battle. My own take is that scholars rarely take into account the pressures of command and how only a few truly great commanders dealt with those pressures. People like Grant and Lee were great in part because they were so rare: it’s so much easier to sit back in the quiet of one’s own study or look out over a nicely manicured field and say what someone should have done (I see the same characteristics in sports fans, who seem better able to give advice on what players should do the farther away they sit from the field of play). Yet one can go too much in the other direction. After the battle Meade was irritated by suggestions that he had contemplated retreating from Gettysburg several times during July 2: I would think it perfectly understandable that he did so, in part because Lee’s failure to renew offensive operations for much of the day gave Meade a lot of time to think. I also think Meade’s reoccupation with his right and his neglect of his left contributed to how that day’s events unfolded, although no one should read that as an effort to get Daniel Sickles off the hook.

I’m less harsh on Meade’s failure to pursue. I don’t think a counterattack on July 3 would have been a good idea. I do think he could have been more aggressive in seeking ways to obstruct Lee’s withdrawal to Williamsport. Once the Confederates had taken up position at Williamsport, I believe that Meade was right not to attack, because I think he would have been defeated … but he might have contemplated ways to pin Lee in place while looking for an opening to cross the Potomac and cut off his retreat into Virginia (after all, if Lee could cross the river, so could Meade). But I admit there’s hindsight and perhaps wishful thinking there.

What do you make of Meade at Gettysburg?