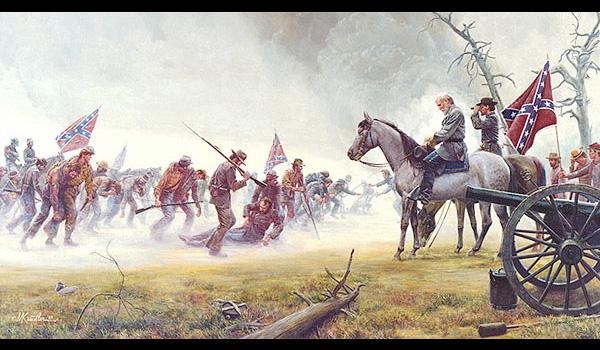 How do you assess Robert E. Lee’s performance at Gettysburg?

And yes … I know the Yankees had something to do with it. But so did Lee. 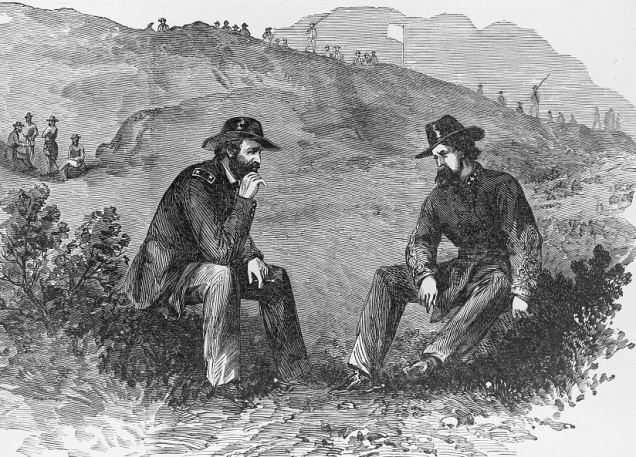 John C. Pemberton decides to have a chat with Ulysses S. Grant.

Third Lieutenant Jordan H. Snow and the 28th North Carolina Infantry arrived west of Gettysburg on July 1, 1863. That afternoon the regiment assisted in driving the Yankees deployed by the Lutheran Seminary off Seminary Ridge, not far from the entrance to West Confederate Avenue. It helped protect the Confederate right from Hamilton Gamble’s brigade of Union cavalry, although reports that the brigade, under James H. Lane, formed square have been questioned by those who maintain otherwise (and they seem to have the better of the argument).

On July 2 the men of the 28th were deployed along Seminary Ridge: they were not a part of the fighting to the south along the Union left, although they were not that far from the Bliss Farm, sight of another clash that does not always receive due recognition in histories of the battle (the structures that remain on the field from the battle sometimes fail to give the visitor the proper understanding of just how many structures there were on the field at the time). At times they came under some fire, but they were not seriously engaged. Their division commander, William Dorsey Pender, went down with a wound that ultimately cost him his life, and Lane assumed command of the division. Whatever chance that the 28th had of being part of the fighting that afternoon ended when Pender went down: otherwise it might have participated in at attack on Cemetery Hill.

Isaac Trimble assumed command of Pender’s division, which was earmarked to participate in the assault of July 3. As part of Lane’s brigade the 28th North Carolina advanced in the second wave of attackers along the Confederate left, and when the brigades in front of them had difficulty, Lane’s brigade surged forward, only to find that the going got tough indeed. Perhaps they dealt with the smoldering remains of the Bliss Farm as they advanced eastward; before long they came under fire from Alexander Hays’s brigade, as well as a flanking fire from the 8th Ohio as they approached Emmitsburg Road. Few men made it across that road; among those hit in the assault was Snow, who was wounded, although he managed to make it back to Seminary Ridge.

Today, 150 years later, the National Park Service will deploy visitors into nine groups, each representing a Confederate brigade,and make their way eastward across the fields west of Cemetery Ridge. I wonder how many people will choose to march with Lane’s brigade as opposed to the three brigades of George Pickett’s more heralded division. Last March, I chose to retrace the line of advance of the North Carolinians (a far less traveled choice): today, I intend to view the advance from the line occupied by Union defenders north of the Bloody Angle (I assume most of the visitors who choose Union positions will select the ground south of that angle).

You can right here … as the National Park Service guides visitors across the ground where Confederates charged … and died … July 3, 1863.

William M. Thomas and the 23rd Pennsylvania Infantry were members of the Army of the Potomac’s Sixth Corps, which was the last infantry corps to arrive at Gettysburg. Initially the regiment took up a position near Little Round Top, just south of where the 20th Maine had saved the Union left (which meant that Thomas spent the evening not all that far away from the regiment of future in-law James L. Denton, located on that height’s summit).

On July 3, the regiment was among those forces dispatched to Culp’s Hill to assist in the repulse of the Confederates who had advanced on the evening of July 2 to an area south of a traverse in the Union field fortifications at the base of the southern slope of the northern summit of Culp’s Hill. While it supported the successful effort to oust the Confederates from Pardee Field and the area around the traverse, it was not heavy engaged. Not long afterward, the regiment received marching orders once more to redeploy east of the main battle line stretching from Cemetery Hill south along Cemetery Ridge, but it was not called into action to help repulse the Confederate assault of that afternoon. Rather, it remained near the headquarters of George G. Meade. It was there that the regiment suffered the loss of an officer, Joshua S. Garsed, the only man of the regiment to be killed at Gettysburg.

Those visitors to Gettysburg battlefield who tour Culp’s Hill usually come across the monument to the regiment. Like several other Sixth Corps units serving in the Third Division, the Greek Cross corps badge is rendered in blue, making it quite visible. A Zouave tops the statue (a later addition to the statue, which was originally topped by a pyramid of cannon balls and was located on the other side of the road, closer to the main battle line). Like James L. Denton, William M. Thomas wore a Zouave uniform, so my ancestors were snappy dressers.  The regiment’s roster also appears at the base of the Pennsylvania State Monument, with Thomas’s name appearing alongside his fellow soldiers of Company C.

The horrors of the battlefield … and the need to make sure that those who died for the cause of Union did not die in vain … inform this blog post that appears elsewhere.