Although William T. Sherman made this point over a century ago, one can turn here to see a fresh rendering of the argument as to which Virginian deserves our plaudits more … Robert E. Lee or George H. Thomas.

I’d choose Thomas, too, although not his fanboys.

Today we learn (twice) from the gift that keeps on giving the following: 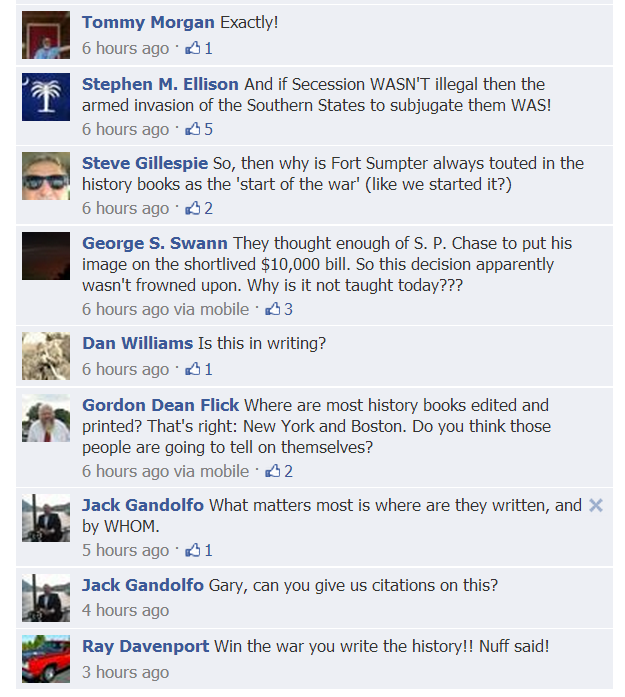 Now for a course in basic research practices:

Whenever you come across a statement offered by Gary Adams (from the gift that keeps on giving, also known as the Southern Heritage Preservation Group), you should first Google the statement, because there’s a very good chance that he lifted it from somewhere without attribution and perhaps without context.

Sure enough, that’s just what he did. You can find the paragraph in question here.

So much for southern honor and integrity … just more cheap and lazy plagiarism by Gary. But there’s nothing new about that.

Indeed, however, in this case, when you Google the passage, what shows up first (at least for me) is this at a blog entitled Alexandria. Indeed, it’s a link in that piece that directs you to the source cited above.

What’s more, the first reference simply takes apart the passage and demonstrates just how wrong-headed it is. As the blogger remarks:

… about the only things the aforementioned account gets right are the fact that 1) Davis was imprisoned; 2) the Johnson administration did attempt to try him for treason; and 3) Davis was eventually released.

After that statement the blogger simply dismantles the claims made in the statement in question.

Neither of the people who posted this statement in the SHPG did any research on it. Nor did the commenters. How sad. How typical.

But then it’s heritage (however ignorant), not history.

For those interested in history, I direct you to the entry in Alexandria.

UPDATE: And the fun continues. Seems Adams and his buddies are reading the blog, and the self-styled chaplain of the group posts as follows:

So we run that through Google, and what do we find? This.

Now turn to page 765 in volume three of Foote’s book, and you’ll find that the quote doesn’t appear there (Foote’s discussing Davis’s options in early 1865). So we have an unattributed quote stolen from an incorrect website wrongly citing a quote found in an unfootnoted book offered as unassailable truth by someone pretending to be a group chaplain.

No wonder his name is Stones.

By the way, the website in question collapsed a series of quotes found on page 1035 of Foote’s third volume, presented it as a unified quote, and who used Texas v. White in 1869 to argue that secession was indeed unconstitutional. All Chase was saying is that secession and rebellion were two different things. He didn’t say anything about the constitutionality of secession at that time: his concern was that in a jury of his peers under a civil trial in Richmond, Davis, like Aaron Burr a few decades before in a somewhat similar circumstance, might go free. Ever hear of jury nullification?

But I’m sure actual history is a lost cause when it comes to certain heritage advocates.