It’s not been a good week for the Virginia Flaggers and their supporters. After issuing a call to action to protest the actions of Washington and Lee University concerning the display of Confederate flags at the Lee Chapel in September (pending an assessment of bathroom facilities), they found themselves reduced to near-invisibility at the Sons of Confederate Veterans’ rally on July 26. Their lame attempt to establish an earlier presence left them open to mockery, while no one saw the likes of Susan Hathaway or Tripp Lewis walking the sidewalks of Lexington: just Grayson Jennings taking pictures and pretending that the Flaggers appeared in force (they were outnumbered by supporters of the League of the South).

Hathaway, Jennings, and company then made a less-than-inspired appearance in the early morning hours at Petersburg National Military Park, where they gathered around their hero, Kevin Levin, but disappeared into the morning mist before the NPS tour of the area around the Crater got underway. I guess Judy Smith wasn’t there, because we’ve had no pictures or blog entry to celebrate what appears to be a lame attempt to “restore the honor.” What honor?

Jennings’s other exploits are worth a separate post. Suffice it to say that he’s skeered of Kevin Levin.

Indeed, the most high-profile activity of the Virginia Flaggers this week was the removal of David Grove as the administrator for Dixie News and Talk, which had once been Connie Chastain’s posting service on Facebook for “proSouthernism,” as she defines it. Seems David crossed the line when he shared with his group’s readers a poll posted on this blog. Susan Hathaway declared it was “a trick”: 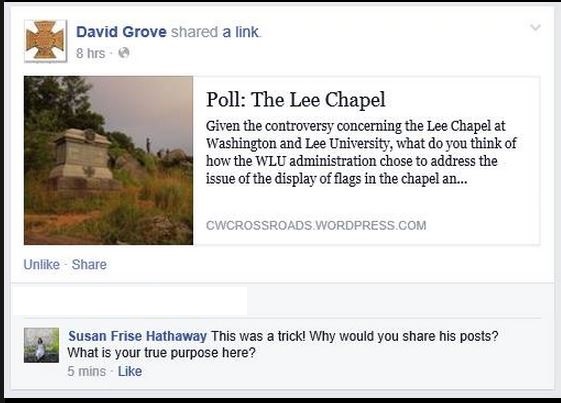 The poll promptly disappeared, but Susan wasn’t through. Time to restore Susan’s “heavy hitter” … Connie Chastain herself …to management:

This was, of course, my real trick: throwing the Virginia Flaggers into such a panic that they revealed their internal disarray and then their embarrassment at having it revealed. You knew David, Susan, and Connie would play along.

Maybe it was all they could do to divert attention from this.

You don’t need to send in the clowns when you have the Virginia Flaggers.