I have been doing a little thinking about the future of Confederate heritage. After all, with the advent of 2015 we will be entering upon the last year of the Civil War sesquicentennial, and one senses that by summer we will have had enough. The last four years have offered the media and others a natural opportunity to revisit the war, its meaning, and its legacy, and several Confederate heritage groups have at various times drawn attention to themselves (one might say that this is what they do best) with the usual array of acts that are now becoming time-worn (and often copied, as in the case of “flagging” and erecting flag poles on private property).

People have grown tired of such predictability. What was once interesting is now greeted with indifference seasoned with a few giggles. The media is looking elsewhere for its next fix. Moreover, some groups seem to lack the stamina to continue the level of buffoonery for which they have becomes famous. Take the Facebook group The Southern Heritage Preservation Group, known for years as “The Gift That Keeps On Giving” before the Virginia Flaggers took away that coveted title and made it their own. Now, with the antics of the Virginia Flaggers becoming old news, and with the copycat effort known as the West Florida Flaggers (sic) struggling to enlarge its membership beyond the organization’s founder, the Pensacola Pariah, one wonders what will become of these groups (oh, I know, they’ll say that they are as strong as ever, which is in some sense true, since they were never very strong).

But never count out the SHPG, which, as we can see from what’s below, is looking to finish the year strong: 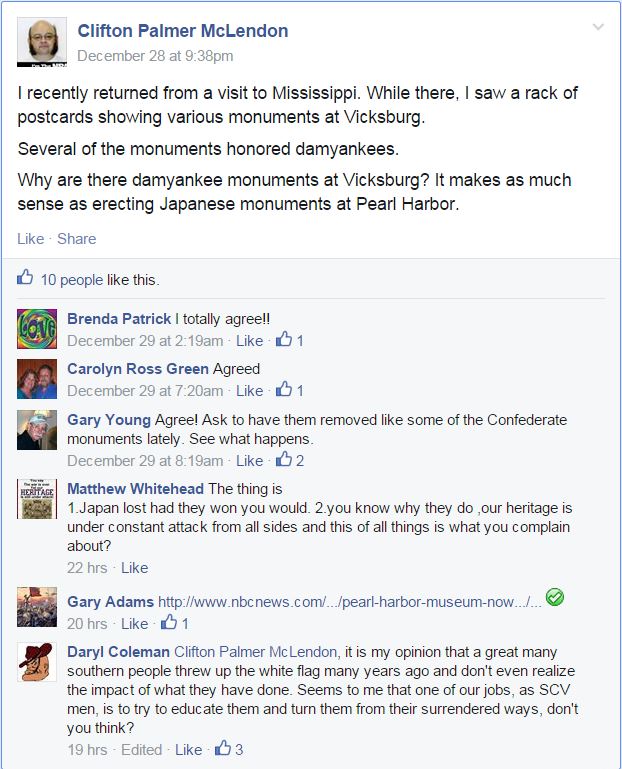 Some things never change: they just become even more ridiculous as they are repeated.