At Dead Confederates Andy Hall recently highlighted another fumbling of Confederate heritage by its most impassioned advocates. This time the effort betrays an ignorance of American art as well as Civil War history.

I’m sure this post came from the heart. And I’m sure many people actually understand the emotions that drives certain people’s passion for the Confederacy. And I’m sure that someone believes this is all somehow a deprivation of civil rights (Confederate heritage advocates are experts on the issue of depriving people of their civil rights).

This is not a painting of long-suffering Confederates by an unknown artist. Rather, it’s Winslow Homer’s 1871 painting of Union soldiers in camp, supposedly based on Homer’s observations in the spring of 1862 during the Yorktown campaign. 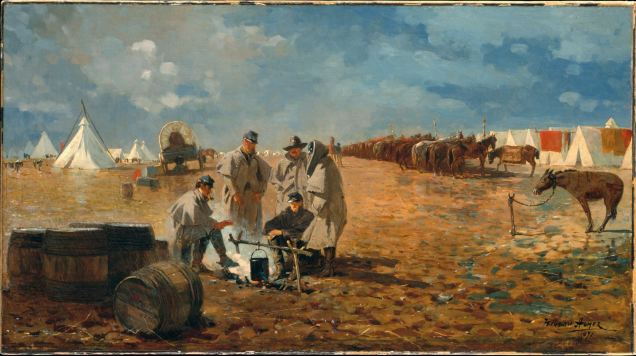 The painting itself betrays a refashioning of history: although the barrel in the foreground displays a corps badge, those badges were not introduced until later, first by Phil Kearny for his men, followed by a more widespread systematic employment starting in 1863. A closer look at the soldiers (as well as the row of horses in the background) betrays that they are cavalrymen. Moreover, the sketch upon which the painting is based would have to have been made in late April or early May 1862, for the 61st New York, the regiment supposedly related to the corps insignia in question, was transferred to the Peninsula at that time, just before the siege of Yorktown ended (Homer included the regiment and its former commander, Francis C. Barlow, in another well-known painting). While a sketch of the mule survives, one might venture that other efforts to date and place the scene portrayed by the painting are at best suggestive but problematic, and that the trifoil on the barrel is really what one nowadays calls an “Easter egg.”

Perhaps the MMA will have a Civil War art expert examine the painting more carefully.

Homer knew how to paint haggard and hungry Confederates, but he did not do so here. But we must remember that it’s not the only time Confederate heritage advocates have mishandled images in service of their cause, and frankly this is not nearly the most serious case.

After all, it’s heritage, not history.

8 thoughts on “Fumbling the Heritage … and Homer”