Confederate heritage advocates always claim to be rather interested in history, although it appears their ability to ensure historical accuracy (as opposed to heritage correctness) is not always sound. Take this example:

This little item appeared on the Facebook page of our good friends the Virginia Flaggers. Of especial note is the quote attributed to William Henry Seward, Abraham Lincoln’s Secretary of State.

I found the quote provocative, and so I decided to do a little research. Guess what I found?

First, apparently Confederate heritage advocates are rather fond of this quote, as a look at Google suggests. But they aren’t always very good at citing the source. Fortunately, it’s also easy to find the quote in question. You will come across it in a book written by one George Edmonds, Facts and Falsehoods Concerning the War on the South, 1861-1865, published in 1904 in Memphis, Tennessee. You’ll find it on page 23: 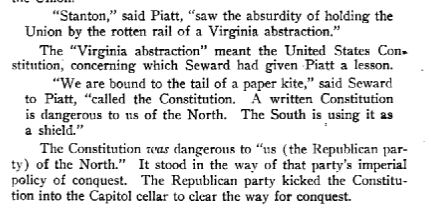 This is a valuable clue. The Piatt in question is one Donn Piatt, a big fan of George H. Thomas and someone who had no problem writing vivid if not always accurate accounts of his interaction with famous folks. Perhaps that explains why a recent biography is subtitled “Gadfly of the Gilded Age.”

In 1887 Piatt published Memories of Men Who Saved the Union, which recounted many of these encounters. Among them, we learn, is the conversation in question.

Piatt recalled that he first met Seward while Seward was still a senator from New York. He later recounted on pages 135-38 the exchange he had with the former governor:

Oh, my. That’s not what Confederate heritage advocates claimed Seward had said. Yes, southerners used the Constitution “as a shield” … “to cover their wicked designs” to expand slavery.

I didn’t see that when the Virginia Flaggers posted the quote. I wonder why. Nor did I see them remind us that Seward said that the Constitution was “a sacred ark of covenant” to the North. Somehow that information didn’t make its way onto the Virginia Flaggers’ post, either.

Someone’s been lying for 112 years. But then distortions of the record have always been essential to Confederate heritage correctness. It’s just that in this case we can see that the practice has a long history. It’s a tradition of dishonesty.

We hear all the time from Virginia Whine Country about “political correctness” and distortions of the past, but somehow not when it comes to the distortions (and fabrications) of the historical record for which certain Confederate heritage advocates are so well known. That’s because the “political correctness” that I have styled “heritage correctness” serves their own self-serving politicized view of the American past. I guess that also runs in the blood of certain haughty Virginians (I’ve always thought the blood’s been diluted over time). Some people’s blood runs hot. Some people’s blood runs cold. In this case, it’s simply run out.

And if you’re waiting for a retraction or an admission of error from the Flaggers, be prepared to wait a long time. Given their interest in monitoring this blog (hi Connie!), we’ll see whether the Flaggers clean up their feed.

Remember, folks, it’s heritage, not history. And if it takes lying to preserve the heritage and restore the (lost) honor, so be it.

10 thoughts on “Heritage, Not History: Distorting the Past To Satisfy Present Needs”