Guess who was interviewed on CBSN/On Assignment tonight? 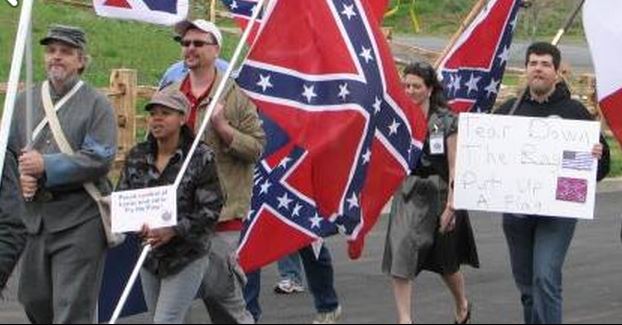 … the one marching next to Susan Frise Hathaway.

Remember, the Flaggers said that it was local Charlottesville officials, and not Heimbach and his fellow white supremacists, who were responsible for what happened at Charlottesville.

They still work well together, don’t they?

You are not alone. But that doesn’t mean that people can’t make fun of them, as this little piece does.

I appreciate the allusion to performance art, although I still prefer seeing the Flaggers and an uunintentionally funny reality show. In either case, however, the act is getting old. Some of the characters have faded into the background (Tripp Lewis, Karen Cooper) or are shells of their former selves (Connie Chastain). No one invites them to community shad bakes anymore (no George Pickett/Fitz Lee flag, I guess). Oh, Susan Hathaway continues to use the group as a vehicle for self-promotion (catch her at Gettysburg on June 10, although you could learn some real history a few miles north that day) and Barry and Grayson do a great job of portraying angry old white men, but, really … it’s time to try something else instead of putting up another flag as if that means anything. That’s so old.

Some people see the Virginia Flaggers as the new face of Confederate heritage, an example of the movement’s future. That’s the same as suggesting that the movement has no future. Good enough.

I’m sure many readers of this blog are aware of the dispute in Charlottesville over whether to remove equestrian statues of Robert E. Lee and Thomas J. Jackson from their namesake parks in the downtown area.

As someone who lived in Charlottesville for four years, I liked the statues, and frankly I wish they were not being moved (I think there are other ways to place them in context). But I don’t live in Charlottesville, and I think it’s up to the people who do (and not people who live outside Albemarle County) to decide what should be in their public parks.

Few people have noted, BTW, that the same sculptor who planned the Lee statue, Henry M. Shrady, executed the Ulysses S. Grant Memorial in Washington, DC. I happen to think that the Grant statue is a superior piece of work, although his Lee is nice enough.

But I digress … because the Charlottesville City Council has decided that the best way to dispose of the statue is to sell it, with the seller responsible for the costs of removal and relocation.

What an opportunity for the Virginia Flaggers.

This well-known Confederate heritage organization needs to do something new and different. No one really cares about their erratic and token presence outside the Virginia Museum of Fine Arts (even Judy Smith seems tired of taking endless pictures of them parading about, one consequences of the emergence of digital photography). And then there are the flags along the interstates and clustered around several smaller cities.  No one cares much about that exercise, either, although the Flaggers suffered a recent setback outside Lexington, when, despite their bluster, a flag came down under pressure from local authorities.

So it’s time for something new, Susan Hathaway. Buy Charlottesville’s Lee (and Jackson, if you can afford it). Make a big fuss. Fly drones over the statues. Have planes pass overhead with banners to remind us of our Confederate “heros.” Do something creative with Tripp Lewis’s defense fund. Buy the statues, have Grayson Jennings rent a trailer, and take those statues to a place where Karen Cooper can appreciate them (if they can first find where Karen Cooper now is). Have Barry Isenhour open a hot dog stand to support the endeavor (make sure he doesn’t eat the product). Give Bobby Lee and Stonewall a new home. Don’t forget Traveller and Little Sorrel.

Restore the honor. Rescue the statues.

Back on March 6, the Virginia Flaggers through their blog assured us that a flag they had helped erect in Rockbridge County outside Lexington was not coming down, desite the fact that local authorities had raised questions about the flagpole’s location.

The flag then came down. Now it appears it isn’t going back up anytime soon.

Not to worry, folks. The Flaggers claim they’ve made arrangements for many more flags to go up around Lexington, and they celebrate this as an act of defiance.

So much for honoring the service and sacrifice of the Confederate soldier in a dignified manner. But then it never was about that, was it?

At last the Virginia Flaggers have found ther ideal candidate for governor: Republican Corey Stewart. He believes that the Confederate Battle Flag is all about heritage, not hate, among other things. It’s a major theme of his campaign.

We’ve been told that the Virginia Flaggers have been changing hearts and minds when it comes to Confederate heritage. Stewart’s candidacy will provide a good test of just how successful they have been, and just how much Virginians have embraced their message. We hope the Flaggers follow Barry Isenhour and support Stewart with all the tools in their arsenal. I’m sure Stewart will welcome the association: it may be one others choose to emphasize.

One of the (not-quite-so) distinctive traits of the Confederate heritage group known as the Virginia Flaggers is their determination to plant Confederate flags across the landscape of the Commonwealth as a way to pay tribute to the Confederate soldier. Having fastened on to this approach (which was pioneered by others), the Flaggers have made something of a fetish of the practice, especially in Danville, Virginia, as well as Lexington, Virginia. The process is a simple one: find a landowner willing to allow the Flaggers to erect a flagpole, erect said flagpole, raise a Confederate flag and declare victory.

These events have not been without their comic moments, and here and there we learn that the landowner involved utters sentiments that are doubtless shared (and never condemned) by the Virginia Flaggers organization (although who is or isn’t a Flagger seems a most amorphous concept). However, recently the Flaggers put their foot down, only to discover that they had instead placed said foot in their wide open mouths.

See, last January the Virginia Flaggers raised yet another flag in Rockbridge County. Problem was that they hadn’t done their research beforehand. Local authorities deemed the location of the flagpole a violation of various ordinances and codes.

The Flaggers pledged to support the landowner in question. They also made another pledge on their blog, on March 6, 2017:

The flag would not come down.

Now, I’m sure that sooner or later, this flag may well go up again. Perhaps, as before, the Virginia Flaggers will learn from their sloppy mistakes (remember this one?). Perhaps they will learn not to make promises that they cannot keep. Suffice it to say that this botched operation is the most newsworthy thing they’ve done in quite a while, a tribute to their lack of effectiveness.

On Thursday, March 9, a Stafford County jury recommended that Confederate heritage advocate Jason Sulser spend the next 127 years in jail for charges connected with the possession of child pornography.

Confederate heritage supporters, especially the Virginia Flaggers and people who sometimes pretend to speak for them, have been very quiet about Mr. Sulser, in marked contrast to their outbursts in other matters. However, one can recall when Susan Hathaway welcomed Mr. Sulser’s support.

Let the usual distancing and obfuscation commence. It is interesting, however, to observe the types of people with whom Susan Hathaway and the Virginia Flaggers do business. Think Susan will visit Jason in his cell?

After all, he’s a sweet Southern boy.

You’ll notice that I haven’t had much to say about the Virginia Flaggers lately. That’s because they’ve become boring, and that means they have lost their entertainment value, at least for me. That doesn’t mean they don’t continue to deny that they associate with certain people that their own social media demonstrates are their close friends, etc.

I suggest that if you want to follow such stories, you start visiting Restoring the Honor, which keeps track of various stories that don’t reflect well on the Flaggers, especially it comes to the people with whom they associate (even as they vigorously deny as much).

Otherwise, things haven’t changed much. Connie Chastain continues to cackle away, and the Flaggers continue on their merry way, even getting a mention in a New York Times article about recent events in Lexington, Virginia, where the Flaggers journeyed to feed their hot dog habit in honor of Robert E. Lee and Stonewall Jackson. I especially liked the composition of the following photograph:

I’m waiting for the usual suspects to Photoshop that out, too. Maybe they’ll replace it with an image of the Virginia Museum of Fine Arts. That’s the only way Hathaway can appear there, flag pole in hand.

Hathaway sounded a sour note when she reflected on the dour prospects that faced her cause:

“We are losing this war on a lot of fronts,” she said. “And folks, if we don’t learn to come alongside of people who might look a little different than us, who might have a different way of doing things, and find ways that we can work together like we did today, we’re not going to get very far.”

Maybe she was pretending to be a member of the Confederate Congress in early 1865 when it debated whether to allow slaves to become Confederate soldiers.

Now, as we all know, one of the ways in which the Virginia Flaggers declare success is by raising a new Confederate battle flag, take pictures of it, and say it’s a sign of progress. They did exactly that this past weekend.

Except, it seems, that this time they violated several local ordinances. If they don’t remedy the situation in 45 days, “there will be penalties.”

Maybe Tripp Lewis can hand over some of the proceeds from his legendary legal defense fund to help out, now that his drone business is up and running.

Most fair-minded people would agree that Hillary Clinton was wrong when she claimed that half of Donald J. Trump’s supporters were “a basket of deplorables.” That claim painted with too broad a brush that tarred too many people.

That said, it is true that some of Trump’s supporters are truly deplorable, especially those who have been associated with what one Pensacola blogger claimed was the future of Confederate heritage … the Virginia Flaggers.

Chastain’s political views, indeed, appear to be straight out of the Trump playbook.

We’ve seen Confederate flags at Trump rallies, which does little to promote the notion that either the Trump campaign or Confederate heritage is especially tolerant. For Trump supporters outside “the basket,” it’s an unfortunate association.

And then came Friday’s revelation of a video, some eleven years old, of Trump and television program host Billy Bush making crude and lewd comments about women.

Guess who came out swinging for Trump? That’s right, Connie Chastain. Given her obsession with the notion of false rape accusations … a theme that has shaped several of her works of fiction … one might well expect that she would shrug off Trump’s crass talk that smacked of sexual assault and rape. And so she did (check the comments section … where Chastain posts under her own name as well as the name “Polly Graff”).

So much for southern womanhood. We recall that Susan Hathaway once said that Chastain did her “heavy hitting.” Now we have a better idea of what that means.

As the Virginia Flaggers celebrate the third anniversary of one of the most amusing days ever in Confederate heritage, the organization decided to take us down memory lane as follows:

You just don’t see that any more.