Another noteworthy aspect of The Future of Civil War History was the emphasis on death and destruction wrought by the violent acts of human beings killing and maiming each other in battle. This was no accident. Peter Carmichael, who organized the conference alongside people from an unnamed government agency affected by recent federal government actions, has emphasized for some time that we need to move beyond a “New Birth of Freedom” theme to explore other organizing principles of site interpretation, most notably his own, which he styles “A Nation at War.” That trope was everpresent at the conference, haunting it in much the same way that other ghosts reportedly haunt Gettysburg to this day.

How Can Civil War Sites Offer a Usable Past during a Time of War? was the title of the first evening session, and I’d argue it was when the conference got under way in earnest. As engaging as Cathy Stanton’s presentation was, I found Peter’s comments even more revealing, because to me they set forth his notion of what he defined as “A Nation at War.” Peter’s been emphasizing this approach for some time: he asserts that the interpretive theme that emphasizes “A New Birth of Freedom,” including the theme of slavery, its destruction, and emancipation, has prevailed and that struggle is over.

Peter and I have had this discussion before in very compressed format: you can see it here between 28:02 and 29:34. What I would have liked is for Peter to have offered a keynote address to his own conference that set forth his views as the primary focus of subsequent discussion. I don’t disagree with Peter’s perspective so much as I think it’s incomplete, and that in its focus on death and destruction it overlooks other aspects of a nation (or nations) at war, issues that can also be addressed at a historical site.

The next morning, John Christian Spielvogel built on Peter’s analysis and his new book in discussing how battlefield interpretive stops described what happened at that place. Spielvogel compared wayside stops at Gettysburg, which emphasized the movements of units and leaders, with markers at Cold Harbor, which emphasize the style of warfare waged during those deadly June weeks. The conference then broke into various working groups and field experiences: the next time attendees could come together in a common session was an evening program devoted to Ghosts and Generals: Theatricality, Dark Tourism, and the Ghost Tour Industry, where one of the themes highlighted was ghost tours as escape from the realities of the battlefield (even as many of the tours featured ghosts from the battle). Of course, one can’t have ghost tours without talking about dead people.

The final morning began with a fine presentation by Mark Smith entitled Sounds and Smells of the Battlefield. Stephen Berry’s comments enriched an already gripping description of the horrors of the battlefield that remained present even when one closed one’s eyes. Once more destruction and death were placed at center stage at the conference. Both on Thursday and Friday, there were sessions devoted to subjects such as trauma and violence, but other topics were covered as well: what strikes me is what the conference explored in common experiences. The message was clear: war is violent, horrible, deadly, destructive, dehumanizing, and, as Sherman put it, hell.

That’s not a trivial point, even if it seems to be an obvious one. Peter highlighted it rather effectively on the first evening when he shared a photograph of three teenagers astride a cannon, then paired that image with one of a drone. He also pondered what would happen if one ended a tour of the battlefield with a photograph of a double amputee (although he later admitted that he had not put his suggestion into practice). Moreover, it’s been discussed before by, among others, John Hennessy, here and here (see how useful blogs are?).

And yet I wonder whether those of us to walk fields once drenched with blood in an area now called a park are always ignoring violence. My daughters have posed on and by cannons; I could argue that far from trivializing death, I have demonstrated how those weapons of destruction have been reduced to something else, much as one would place a flower in the barrel of a rifle.  Sometimes it’s enough to stand there and wonder what possessed men to withstand such terror and continue to fight under such circumstances as they are engulfed by chaos and confusion … and then return to do the same thing time and time again. After all, as we know from the photographs taken of Civil War dead, Americans at the time did not altogether shy away from the violence of war, even if they sought to cope with it in various ways that somehow took the edge off it … although how exactly can one say that after looking here: 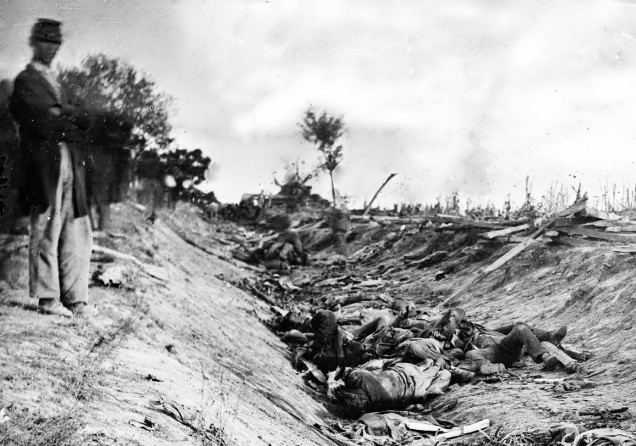 I happen to think that if we are serious about discussing “A Nation at War” at Civil War sites that we have to include such scenes, but that we also have to include other issues, such as the matter of democracy and dissent, the effect of war on the folks at home (and how the folks at home affected what happened at the front), how wars challenge the very values which they are supposedly fought to defend and preserve, and so on. Several NPS wayside interpretive markers indeed portray the horrors of the battlefield, as visitors to Gettysburg and Antietam can attest, in ways that go beyond the sharpshooter’s nest at Devil’s Den. People who walk the streets of Gettysburg already know far more about what happened there than they once did. Yes, there are ways that we can provide opportunity and space to ask certain questions and ponder our answers, but for me the essential issue is how do we render recommendations into concrete parts of the visitor experience, all the time recalling that there are many visitors who come to these sites for many reasons (and many who come more than once). We can’t define a visitor experience (let alone control and shape it) precisely because at some places there is no single experience in the first place. We can influence, but we can’t control what can’t be controlled, especially as it becomes even more difficult to control, contrary to the wish of those who are fond of gatekeepers and the like. Those days are gone, if they ever indeed existed.

Finally, it’s critical that those people who seek to define what a visitor experience might include should first consider what is already being done at various sites. I didn’t need someone to tell me about interpretation at Cold Harbor (an interpretation that in some ways perpetuates stereotypes of what happened at Cold Harbor) because I had been there already (several times). I recall the first time I visited the field (in 1974) and how I came away from that experience impressed by the cost of war and the eerie nature of the ground: the same thing happened when I walked along the stone wall at Marye’s Heights or up Bloody Lane at Antietam.  Yet I can’t recall a more fitting moment than that displayed in the final scene of the video below: