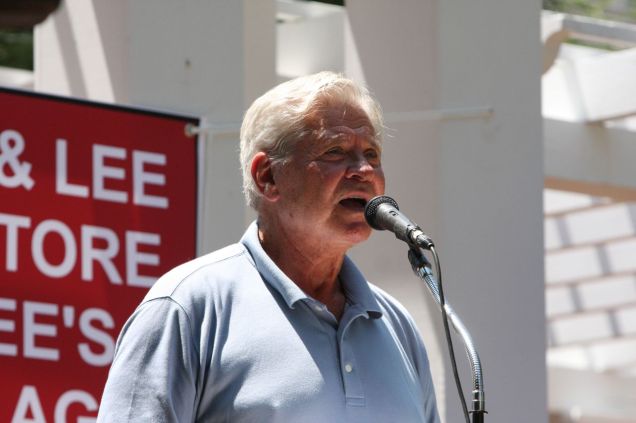 Last week I expressed some hope that the appointment of Ben Jones as the chief of heritage operations for the Sons of Confederate Veterans was a step in the right direction for that organization. Jones’s initial press release was a vast improvement over the ranting of Brandon Dorsey.

I thus must confess that I was a little disappointed when I read the release he issued following last Saturday’s gathering at Lexington. Entitled “The New Bigots,” it reminds me not a little of the same confrontational approach employed by The Committee last spring when this whole matter commenced, and it’s in line with the “evilizing” rhetoric of various other Confederate heritage groups.

The Chapel is a beloved and honored place to the more than 65 million Americans who are descended from those who fought for the South in that conflict.

Folks, there is a difference between fighting for the South and for the Confederacy. We’ve been over this before. There were a good number of whites and blacks who were just as southern who fought for the United States and the preservation of the Union. Indeed, given the percentage of the southern population that was enslaved or sided with the United States, just about as many southerners (white and black) supported the defeat of the Confederacy as supported its quest for independence. Equating “the South” with “the Confederacy” is, among other things, simply bad history.

We cannot fathom why anyone would attend a school named after Robert E. Lee and then say they were offended by the St. Andrews Cross flag. Nor we cannot fathom how anyone could take them seriously and cave in to their threats. But in the current climate of ‘South bashing’, such a radical act as this seems to be accepted as some sort of litmus test for the “politically correct police”.

As someone who attended a university founded by a slaveholder and where slaves were employed in the construction of its striking central campus, I freely admit that something may not strike me as it strikes others. Then again, I’m not an African American, and I’m not looking at a flag that represents soldiers who, whatever their individual motivation, fought for the establishment of a nation founded upon the cornerstone of human inequality and slavery, as Confederate Vice President Alexander Stephens proclaimed in 1861. As for the invocation of “politically correct,” I find that intellectually bankrupt. There were no flags in the chapel until 1930: their introduction at that time was a sign of what was “politically correct” at the time. After all, both Birth of a Nation and Gone With the Wind could be seen as expressions of political correctness as well, and this whole controversy can be seen as an instance of Confederate heritage correctness. So let’s set aside this vacuous slogan if we really want to make a serious point: much of what WLU’s president said in his press release argued for a different understanding of Lee than one who is “politically correct” might insist upon.

It appears that those who have a very simplistic view of American history have decided that the 150th anniversary of The Civil War is the right time to demonize the Southern culture, to intensify their vilification of Confederate heritage, and to continue to act as if their actions are some sort of moral crusade.

We who are of Confederate heritage honor our ancestors for their sacrifice, their perseverance and their astonishing courage against overwhelming odds. These men were our family, our kinfolks, and their blood runs in our veins. But the new bigots of political correctness are exhibiting the same kind of narrow minded prejudice and knee-jerk bias that has always been the enemy of brotherhood and understanding. This latest example is the breaking point for us. Our patience with this new McCarthyism is exhausted. These mean spirited attacks upon us come from the same sad place as do all racial, religious, and regional prejudices. They are rooted in an ignorance combined with a sense of superiority.

Well, at least the first line implicitly recognizes that Confederate heritage is something distinct from southern heritage. But when someone decries “the new bigots of political correctness” without taking a more critical look at the people who rallied in support of the SCV last Saturday, one wonders whether other forms of bigotry and intolerance are acceptable to the SCV. That’s right … as we’ve already pointed out, various white supremacy groups, including fans of the League of the South, were there (in greater force, it appears, than the never camera-shy Virginia Flaggers). Are we to assume that the views of these people are acceptable to Ben Jones and the Sons of Confederate Veterans?

I doubt it, but you can see where someone could reach that conclusion. 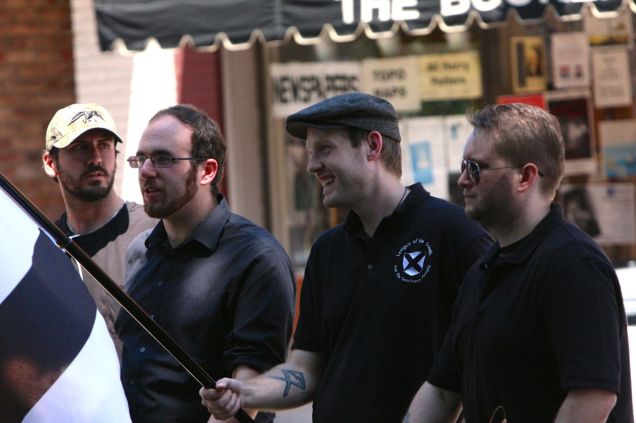 Want more pictures? We have ’em. Want links? We can provide ’em.

So please, don’t lecture folks about “mean spirited attacks” reflecting “racial, religious, and regional prejudices” without taking a more critical look at your own supporters.

Over 50 years ago, that courageous Southerner Dr. Martin Luther King, Jr. said, “I have a dream that someday on the red hills of Georgia the sons of former slaves and the sons of former slave owners will be able to dine together at the table of brotherhood.” And that has happened. We have done that for decades now in the South, in great part because Dr. King did not qualify that dream or put asterisks on it.  He did not say that we would dine together in brotherhood only if we dishonored our ancestors or if our family could routinely be called bigots, traitors, and racists. He was a far better and wiser man than that. He meant that we would dine together by accepting our past as it is and that we would understand each other by our shared culture of work and weather and food and music and memory.  That way we could strive together to heal the wounds of the past and thus build a proud and loving South, where folks are judged only by the content of their characters.

Well, at least this is a more positive invocation of the legacy of the civil rights movement than that invoked by Brandon Dorsey, who compared Confederate heritage advocates to the targets of Bull Connor’s police at Birmingham.

However, this too is a selective memory. When people opposed Dr. King and the movement he helped spearhead, what flag did they wave? And is it not true that many of the people who rallied behind Jones and the SCV do not share his vision of a united and harmonious South as part of a greater United States? After all, southern white nationalists preach secession. Many of them are very explicit about their racial attitudes. Are we to assume that Jones does not know about them? If he does, why does he not direct his fury toward them as much as he does to other critics of the South he loves, because, folks, these people oppose the South Ben Jones loves.

I hope Ben Jones is interested in building a proud and loving America.

Slavery was not the sin of the South, but of the Nation. Chattel slavery existed throughout every colony and state for almost two centuries. Slavery was funded mainly by the Northern banks. The greatest profits went to the North. The North built the slave ships and manned them. The cotton also went North, to the vast textile mills in New England.  The North’s complicity in prolonging and profiting from slavery is one of the best kept secrets of American history. The work of the slaves helped to build America, both North and South. And yet the South has long been the scapegoat of these attacks from academia and the media.

This history lesson is as flawed as the one it purports to replace. It’s enough to point out that if slavery’s the sin of the nation, it’s also the sin of the South. No one forced white southerners to buy slaves. White southerners pushed for the westward expansion of the institution. Secessionists pushed for independence to protect and promote that institution, and Confederates fought for a nation built upon the cornerstone of slavery and human inequality. If anything, historians have talked about the presence and persistence of racism North and South, as well as the complicity Jones outlines. Read my stuff, Ben. I’m a part of academia.

In short, complaints about the media and academia simply reinforce my sad sense that this is more of the same.

It is long past the time for the new bigots of political correctness to get over their condescending sanctimony and to enter into the real world of brotherhood and fellowship. And it is time they understand that insulting our heritage is not the way to build bridges of progress.

I don’t think one builds bridges by calling people bigots and decrying intolerance without taking a closer look at the very people who were cheering you on last Saturday. I don’t think you should talk about “condescending sanctimony” in a press release that reeks of it. In short, if this is what we should expect from the SCV, let’s just set aside that dream of brotherhood and fellowship, because it appears that it has to be all on one side’s terms according to their definitions.

I respect Ben Jones. I think he’s a smart person. I don’t think this is a smart press release, and I don’t think it’s a promising start. The task facing the Sons of Confederate Veterans is to defend Confederate heritage from its critics and rescue it from some of its supporters who embrace the very sort of bigotry that Jones rightly deplores.